Rant: Tourists who forget to tip

Warning: this is not going to be a rant about a major issue in this country or this world right now, but just a rant about some certain types of customers I have had in the bar over the past week. Writing about it isn’t going to change anything, but at least I am going to be able to get it off my chest and move on to bigger and better rants. 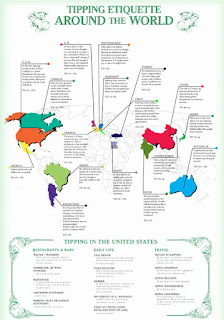 I’m sure most foreigners who come to the States peruse a guide book or two, look online for tips, good places to go, where to eat, where to drink and all of that. Even if I like an adventure when I go off to explore a new country I always look up what the customs are and if there is anything I should know (for example, taxis charge tourists triple in Egypt so you should avoid them if you are broke). Every single guide book on the US tells you that service is NOT included in restaurants and bars. Yes, NOT included. This means that you leave a tip. Customary tips are 15-20% after tax in restaurants, 15%-20% for cab rides and probably a dollar or two per drink in a bar. If you don’t tip you are either extremely rude and/or you are unhappy with the service, and if it’s the latter should explain why to a manager so that they can put it right. Most people who work in the service industry get an extremely low hourly wage or shift pay, or none at all, so they literally LIVE OFF the money they make in tips. These tips don’t go towards new shoes, dresses, expensive and frivolous items. They go towards rent, bills and food to survive. Most people I have encountered are good tippers, they know the rules and to be honest for every bad tipper there are always at least 2 good tippers, so I don’t ever really complain about it. Until you get multiple different groups of foreigners in the bar at different times in the space of a few days, ALL of whom acted in the same way.

The first group of four Polish people (I think – they were speaking some type of Slavic language) got 5 drinks (after tasting a couple of beers and deciding on a local draft beer). They paid, didn’t tip and went to the back room where they lingered over their drinks for a while. Once they had gone I went to clear their glasses… And they had STOLEN one. Yes, I know the Coney Island beer pint glass is kind of quirky and cute, but come on!! If they had asked I would have sold them one!! Just after they left a couple of Brazilians walked in and sat at the end of the bar. They had three rum and cokes, paid for them, entertained themselves with extravagant public displays of affection and then left, without tipping of course. One of my friends told me to tell people that it is customary to tip in this county, but I can’t get over my British politeness and say it outright. So I suppose it’s my own problem in the end. Then a bunch of Brits came in, ordered a round and gave me a dollar tip, with a big smile on their faces like they were doing me a huge favour. Thanks. The next one of them to order a round had obviously been in the US before and made up for it when he paid for their round, so I didn’t get too annoyed about it. The thing is, I was in one of my friend’s bars last night and a different group of Brits did the SAME THING with the dollar tip, making it out to be a huge deal that they were leaving it as a tip. It’s common knowledge in England that service is not included here in the US, so they don’t get to hide behind the whole “well we didn’t know!” lie. And if you don’t know what you should leave, then just ask! I’ve had people who have asked before and I let them know. Then it’s up to them to decide!

I think it all boils down to being a little bit more knowledgeable about the location that you are going to. When I’m abroad I don’t remove the service charge from the bill and just pay for the food and/or drinks!!

OK, rant over. Come and watch real football at the bar with me tomorrow from 11am and I promise not to start ranting about people who write really mean reviews on Yelp.

Here’s a lovely page on Wikipedia that explains tipping customs all over the world: HERE

For a larger version of the image above go HERE

Now you will never need to worry about being the object of a bartender or servers rant on their blog ;)

You should have the seen the look I got when I tipped at various restaurants and pubs in England. Quite humorous really. I think I remember Grace laughing at Mummy and I for leaving so much on the table. Ho ho.

Haha of course - but you don't NEED to tip in England! I bet other countries love Americans though, because you get so used to tipping that you just do it anyway!

I'm glad I looked, I might have embarrassed myself in Japan at some point in the future. . . .

Although, not to play devil's advocate, I think if I had never come here I would probably travel the world qua inconsiderate Brit non-tipper. Ho ho.

You probably would have looked up the customs of the country you were traveling to first though, even just for information on currency and all that.